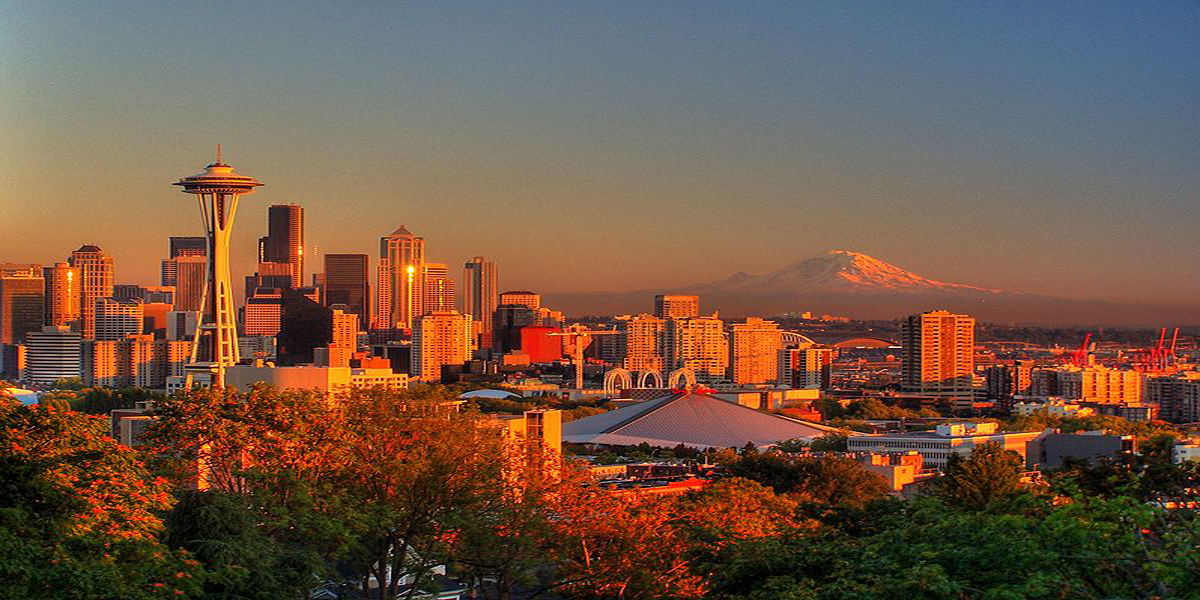 We where contacted to come out and look at a water problem some nice people in Edmonds where having. They had water coming in the garage and bathroom up through the floors and walls. Mold and drywall damage had happened and they wanted it fixed. There had been several water proofing contractors and all had given different bids to fix the problem. Most had offered to install inside french drains around the perimeter of the foundation to catch the water inside and channel it away to a sump pump system. A very common fix that is being used today. We only like inside solutions if it is the only way or last resort because it does not solve anything but is just a glorified collection method of the water. 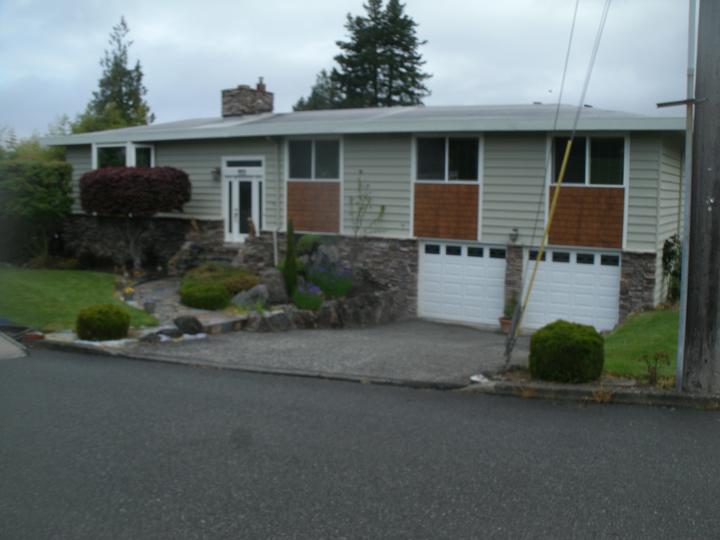 So we did an inspection of the inside and an inspection of the outside which included digging small test holes near the areas where the water was coming in at and all four corners of the house to determine the water level around the home that we where dealing with. Seesnake sewer inspection cameras where used on the existing Concrete downspout lines. It was learned that there was a lot of underground water all around the home but the reason was because the downspout lines where 50% to 100% full of sand and dirt. Without being able to camera the full lines we had to dig in certain spots to expose the lines so that they could be cleaned (hydro jetted). 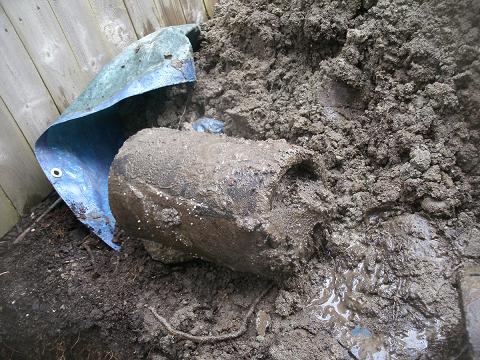 The plan was to clean the lines but also to find where the lines where actually meant to take the water to. Sometimes the lines go to a Storm Sewer system in the street other times they will dump to a combined sewer in the street and other times they may just go to a drywell that is dug out in the yard someplace, you just never know. As it turned out the lines around the home where concrete that acted as downspout lines and also footing drains for the house then they tied into a 6" concrete line that went under a sidewalk and across a major street to a Storm Sewer Line. The entire line was 100% clogged with dirt and sand and roots. No wonder the water was coming up in the home! It had no where to go the entire foundation footing system and the downspout roof system was non functional. The resulting damage that could have happened over the next years could have been devasting to the foundation. Now the problem was what to do the house had very expensive hardscape around it and to tear everything up and install a new modern footing drain and rain leader system would have been the most costly thing next to the purchase of the home to the people. 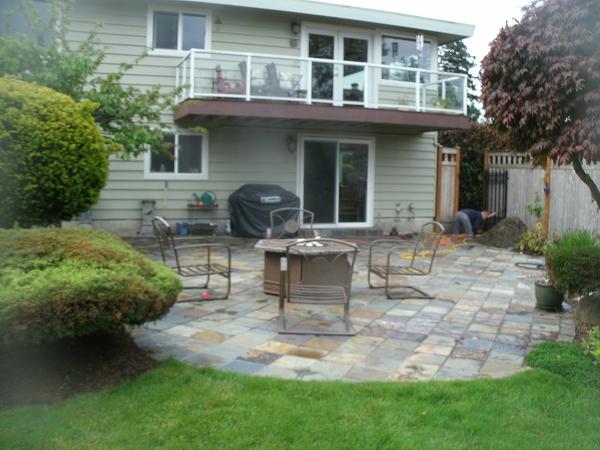 Now installing a new system would have been best but they could simply not afford it. Plan B was to Jet the main 6" pipe to the city system. I truthfully did not know if it was possible because it was so packed but was willing to give it a try! We have one of the Biggest trailer jetters in the Seattle area in private contractors hands. 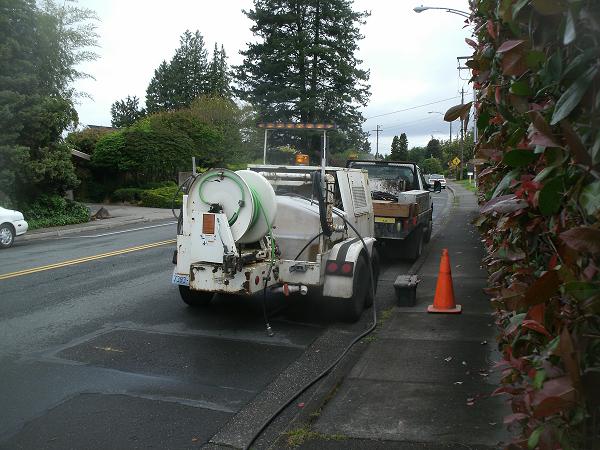 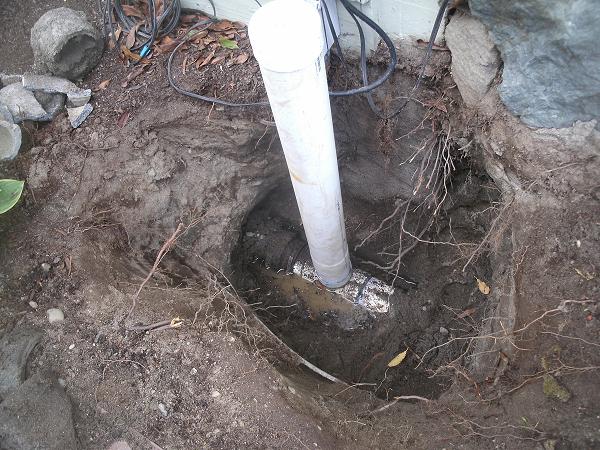 We used a 2" trash pump while jetting the line to handle the water back up while clearing the line. It took several hours but the line was cleared with our Warthog nozzle and all the water just went away. The camera showed the line was in good shape but had just clogged from roots and all the mud and sand. We continued to Jet the lines all around the home and added cleanouts at all four corners for any future maintenance that will be needed. The system was restored to a working condition saving the customers a lot of money. This is just an example of why you need to investigate the problem before giving solutions. Having the right equipment is what separates the men from the boys in this business. 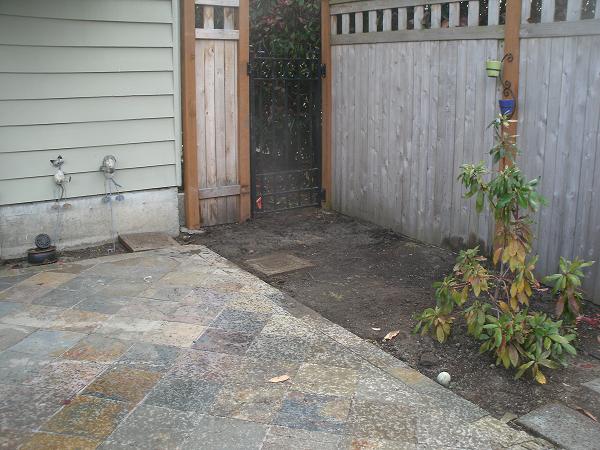 This is what the largest excavation looked like after the repair. You can hardly tell that we where there.

We used a combination of tools and techniques, trenchless, pipe bursting, Hydro Jetting and sewer cameras to solve a water issue so don't call a water proofer when you need a drainage contractor to do the repair we just plain have the tools that they do not. that's why we say " Wet basements Cured with Pipe not paint!"